Here’s the key to managing long-term pain: the brain can only process one thing at a time with perfect clarity. It doesn’t focus on both pleasure and pain at the same time well. You can exploit this to escape from pain. The trick is to find something that requires a lot of brain function – following the plot of a book or TV show, sudoku, crosswords, puzzles, video games, and best of all, painting!

Like Wendell, my Dad, I (Wendy Roberts) am also an artist. Recently, I broke both bones in my ankle plus the malleus, and also, I tore the ligament on the back. It’s a bad injury that required surgery to set and it will take months to heal, so in the meantime, I am in a wheelchair. My situation isn’t nearly as serious or permanent as my Dad’s but I am learning a lot about the effect painting has on the control of pain, and the effect that pain and physical constraints have on painting. I want to share what I have learned firsthand so clearly now. 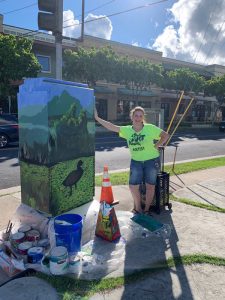 Photo taken a few minutes before I broke my ankle.  The dropcloth of doom is visible, the small curb is obscuring my shoes.  Don’t use plastic dropcloths!  Photo by Jennifer Noel

The next two paragraphs are all about my injury, so you can skip it and take my word for it that my ankle has been a horrible experience, or you can delve into some specifics if you want the injury story. I will not regale you with the goriest play by play, but I was working on a mural, and I made the mistake of using a plastic dropcloth outdoors. Don’t ever do that because it turns into a slip and slide with the slightest rain! Furthermore, I had bad slippery shoes on that were worn and loved to the point of being totally smooth on the bottom – don’t wear shoes like that either! My left foot slid so fast as I stepped off the curb, that it took me a moment to figure out why my viewpoint had just dropped by 4 feet. I heard and felt the snap of my right leg which was folded under my body and I knew the ankle was broken. I took a quick look at my leg to try to ascertain the amount of damage, and as I slightly lifted my right leg, the ankle flopped sickeningly at an unnatural angle. I had the presence of mind to not look any further at my leg. I focused on getting help. There were some unlucky witnesses that became essential to my rescue and I am so grateful for their help! I could tell the sight of my ankle really bothered a couple of the people who helped me. I am sorry for that! I don’t know everyone who helped that day, but a nurse, Cynthia Bartlett, was one of the most involved. I appreciate her calm in the storm! After an ambulance ride, it took about 5 – 6 hours to hobble out of the ER in a splint and crutches.

In the early days of my ankle, nothing was really keeping the bones in place, so they would shift, and the pain level was the worst sustained pain I have ever experienced.  On a scale of 1 to 10, with 10 being uncontrollable barely conscious, and 1 being completely fine, I was constantly shifting between 5 – 9 pain in those days before surgery, usually I felt like it was around a 7. After the initial splint that lasted 3 days, I was given a walking boot for the sake of ease – not because I was ready to put any weight on my foot, but because theoretically it can be adjusted to accommodate swelling. I hated the boot.  It felt like a rock on my leg as if it had no padding at all.  Because of my impending surgery, the doctor only wanted me to take Tylenol. It isn’t very effective for me.  I had to wait 11 days for surgery. The first couple of days I couldn’t do much of anything, but after the initial devastation, I was able to fit a chair with a pillow behind my easel. I could finally prop up my leg to work on painting, and it was only for an hour or two per day, but it was the best pain control of the day. Only painting could drop my pain to a level where I almost didn’t notice it.

Painting became a refuge from the flames of pain. I have never experienced more of “the zone” than in those intense pain days. The zone is that state of mind where an artist is so fully processing the visual information and busy making choices of rendering that it almost feels directed by a creative spirit outside yourself. It’s an intense focus that makes the rest of the world outside the painting disappear. Hours can go by and feel like nothing. Every seductive detail of the paint was such a pleasure during this state of escape. I would listen to music (which I normally don’t do, but it helped me immerse into painting during this time), and I would paint the most elaborate parts of my current painting without the usual mental fatigue I get when depicting fussy details like grass or ferns.

I also noticed the impact of physical restraints on my mode of working. The painting I am working on is huge, and I couldn’t move its position or my position like I normally do, and thus, my painting developed in a much different way than normal. It forced me to work on a small area per session. Normally, I am physically free to search out various areas throughout the painting with the same color and I can place many different stokes in various parts of the painting at one time without changing my brush color as much. Instead, I had to work on one small area of the painting with lots of different colors at once. It’s a slower way to work under normal circumstances, but right now, shifting the position of the painting is a 5-10-minute task that involves raising or lowering my easels. This meant choosing a small area and sticking with it for two hours, usually completing it almost to finish. This is what my Dad would do too. His painting would lay flat on a table, but he had a limitation of reach, and he had to rotate it upside down to paint the sky most of the time.

Also, I noticed the cost of sitting up to paint.  After I would paint for a couple of hours, the pain would spike as I once again felt my body awareness return. I always knew when it was time to quit for the day. It gave me a large amount of insight into why my Dad worked the way he did. I remember after he would paint for the time his body could endure, he would rest for a couple of hours.  It took stamina to be able to sit up and paint for him too.  It is a pattern I followed without even noticing it at first. I would try to extend out my painting time as much as I could, just like he did, but it took a toll on my body and I would have to rest.

The lesson I have taken from this experience is the added dimension of pain control that art gives to those who spend time making it.  I love painting even more than before, and I see the passion my Dad had for it and the relief from pain it granted him.  I highly recommend painting as a pursuit during painful times. If you are facing a long recovery, finding a way to sit at an easel or table, or buying a portable sketchbook to draw or paint while reclining is a great way to take your mind off your troubles and escape the pain.